Happy birthday dear Is Not... 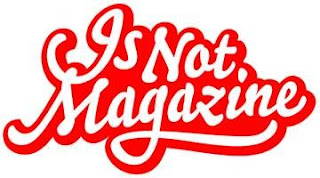 A Very Happy 2nd Birthday – Is Too!

“Even bigger than TV Hits when you unfold the Home and Away fold-out” ~ John Safran, TV Personality

Publishing oddity Is Not Magazine is all red in the cheeks to have reached its 2nd birthday and is celebrating in style with another of their entirely fabulous fundraising parties.

Saturday 2nd June seemed an apt date for a 2nd birthday party, and the Is Not folks have lined up a spangled posse of solid gold entertainment for their party The Golden Years, at Miss Libertine, in line with their All That Glitters Is Not Gold issue theme. Performing show-stopping tap routines at two special times in the evening will be The Golden Girls, a troupe of women aged 65 and better! On the wheels of steel will be DJs Mafia, Barrie Glitter and Plump N Rosie, as well as rising bands of the indie music scene, The New Electric and Near Your House.

Is Not Magazine is a 1.5 metre x 2 metre billboard poster/magazine – that’s roughly the size of a double bed mattress! In fact Is Not’s status as the Biggest Magazine in the World is currently being assessed by Guinness World Records. The magazine gets glued to walls in and around the streets of Melbourne, as well as bars, cafes and laundromats. Its readers are a dedicated bunch, braving weather and tricky locations to stand in the great outdoors and read the magazine from crouching down to read the bottom, to tippy toes to read the top. Almost always the crossword is completed filled in by a variety of pens and handwriting.

Is Not Magazine is an independent, not-for-profit publication and carries no advertisements. Each issue is funded directly by regular parties that are legendary amongst their readers and supporters.

Is Not Magazine’s striking design is due in no small part to Underware, the acclaimed Dutch type foundry who generously donate all their fonts to the project. Contributors to Is Not are as far flung as Helsinki, Buenos Aires and Michigan, and as of August 2006, Is Not has been gracing the streets of Sydney and stocked in stores across Australia as well as available for purchase through their website.

Is Not has been internationally recognised by Polish Elle magazine, UK based Computer Arts magazine and US based websites such as style.com (Vogue online), Gawker and Cool Hunting as well as being part of TypeCon, a New York Design Conference and CMYK Magazine Festival in Barcelona. The editors have participated in various writers’ festivals, workshops and conferences around Australia as panelists and speakers since the magazine’s conception.

Is Not has been everywhere man. It’s time you went to Is Not. Come party like you’re two years old, but remember, All That Glitters Is Not Gold.

Posted by richardwatts at 4:38 pm

Email ThisBlogThis!Share to TwitterShare to FacebookShare to Pinterest
Labels: independent, is not, party, publishing

I will have to check it out...

oh noes. my birthday that night! arranging drinks elsewhere - will you come after p'raps?

Of course I shall!